An overview of the stylistic features of Jewellery from the 18th, 19th and 20th centuries
Elegant antique and vintage Jewellery for the individual with their own sense of style, each piece carefully collected. Wear it your way!

An overview of the stylistic features of Jewellery from the 18th, 19th and 20th centuries 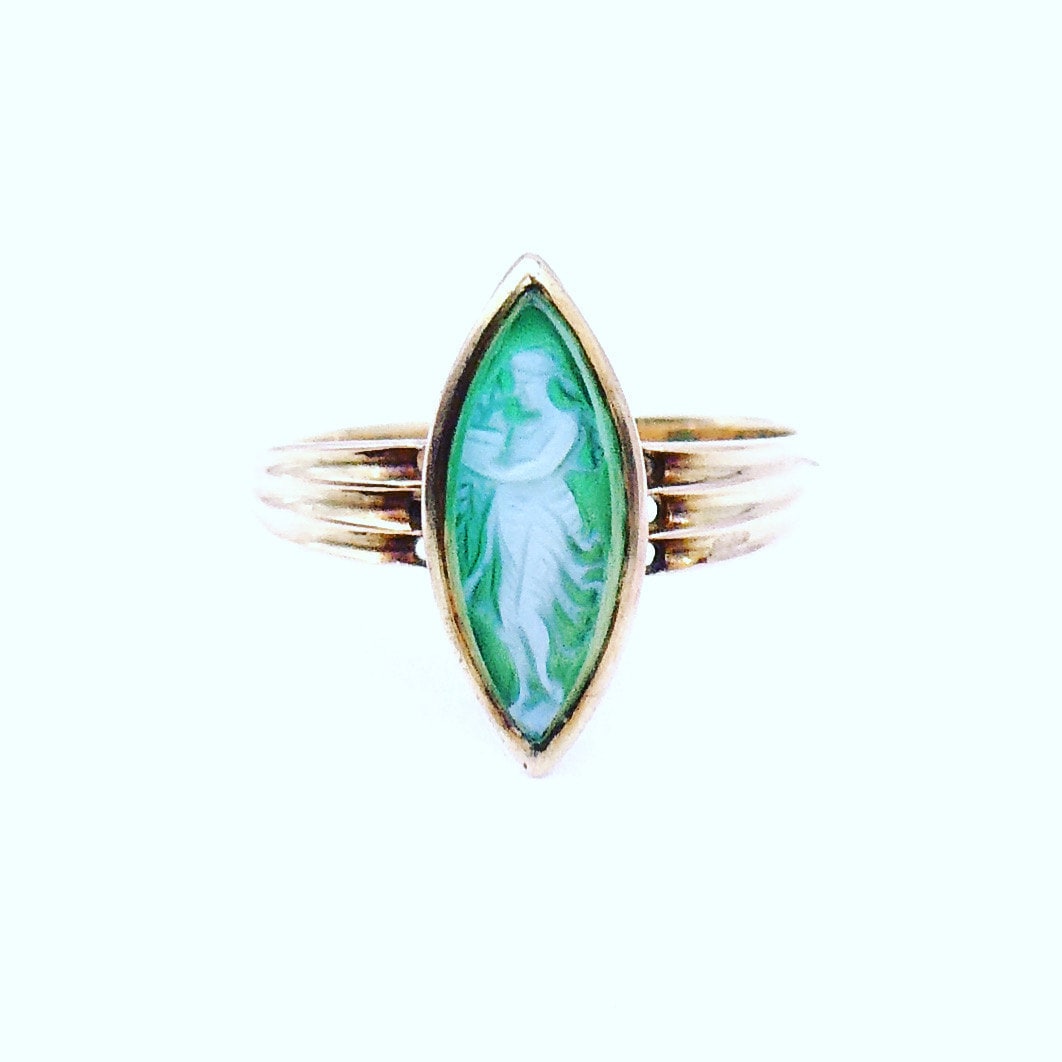 Jewellery from the Georgian period is very distinctive. It is recognisably jewellery from a different era, more so than Victorian or Edwardian jewellery. Gem stone cutting evolved a great deal in the Victorian and Edwardian times so Georgian diamonds look less polished and refined. Black enamel mourning Jewellery is a feature of georgian jewellery with or without hair! Hair was woven into brooches, bracelets and even rings.Enamel was coupled with pearls and rings were inscribed with names and dates of familiy members who had passed away.

Ribbons and bows were a popular theme. Earrings with two bows and pendulum drops were fashionable, as were “Riviere” Necklaces; these were  necklaces made with  connected mounted gemstones. Jewellery that trembled “en tremblant”  and  “Fer de berlin” Jewellery which was blackened iron openwork all originated from the Georgian period. Flowers, foliage, birds and butterflies were popular motifs. Jewellery of any period is influenced by what is  going on at the time.In this period the remains of Pompeii had been unearthed so laurel leaves and grapes featured in Jewellery also.

For a significan part of the Georgian period, gemstones were mounted in a closed setting as opposed to the later designs that allowed the light pass through. They were backed with foil that reflected the light in the stone,  so that they would sparkle in candlelight: Diamond cuts in the Georgian period were called old mine cuts, they had a square shape as the technique for rounding diamonds had not yet been developed. They are bulky and their facets are irregular looking in shape. There are beautiful in their own right but they lack the brilliance and sparkle of a later diamond and are identifiable for this reason.

There was very detailed metal work in this period, such as repousse and cannetille. Repousse was a technique of hammering metal on one side to feature designs on the reverse. This can be seen in lockets from the period. Cannetille was similar to filigree in that it was comprised of thin sheets of wire or metal delicately formed into motifs such as scrolls, flowers, leaves. It was also combined with granulation where small beads of metal were added to create detailing. Pinchbeck was a form of costume Jewellery from this period also. It was made from a combination of metals usually copper and zinc and was created so that those travelling by stagecoach could wear their less valuable Jewellery by way of adornmnent without safety concerns!

The Victorian period has been stylistically dividedinto three parts: early, mid and late Victorian as it extended over such a long period.

Jewellery in the early victorian period featured motifs such as serpents, lotus flowers, snakes, trees and birds. There was a prevalence of the use of seed pearls, ivory, onyx, agate, diamonds, emeralds and amethyst. In  1820 diamond cutting evolved from the old mine cut to the old European cut due to new techniques and machinary so diamonds were rounder and more even. Sentimental love Jewellery was popular;  heart shaped rings and pendants set with seed pearls and gemstones. Rings were set with coloured stones that spelt out words such as “Regard” or “Dearest”.Mizpah rings were given between lovers;this word originated from Genesis in the bible and symbolises the line : “The lord watcheth between me and thee when we are parted from one another”.Keys and lockets were love symbols and were also given between couples.

Below is a lovely example of an engraved locket. Follow this link for more victorian lockets in ths shop: http://www.collected.ie/shop/27650083/lockets-charms 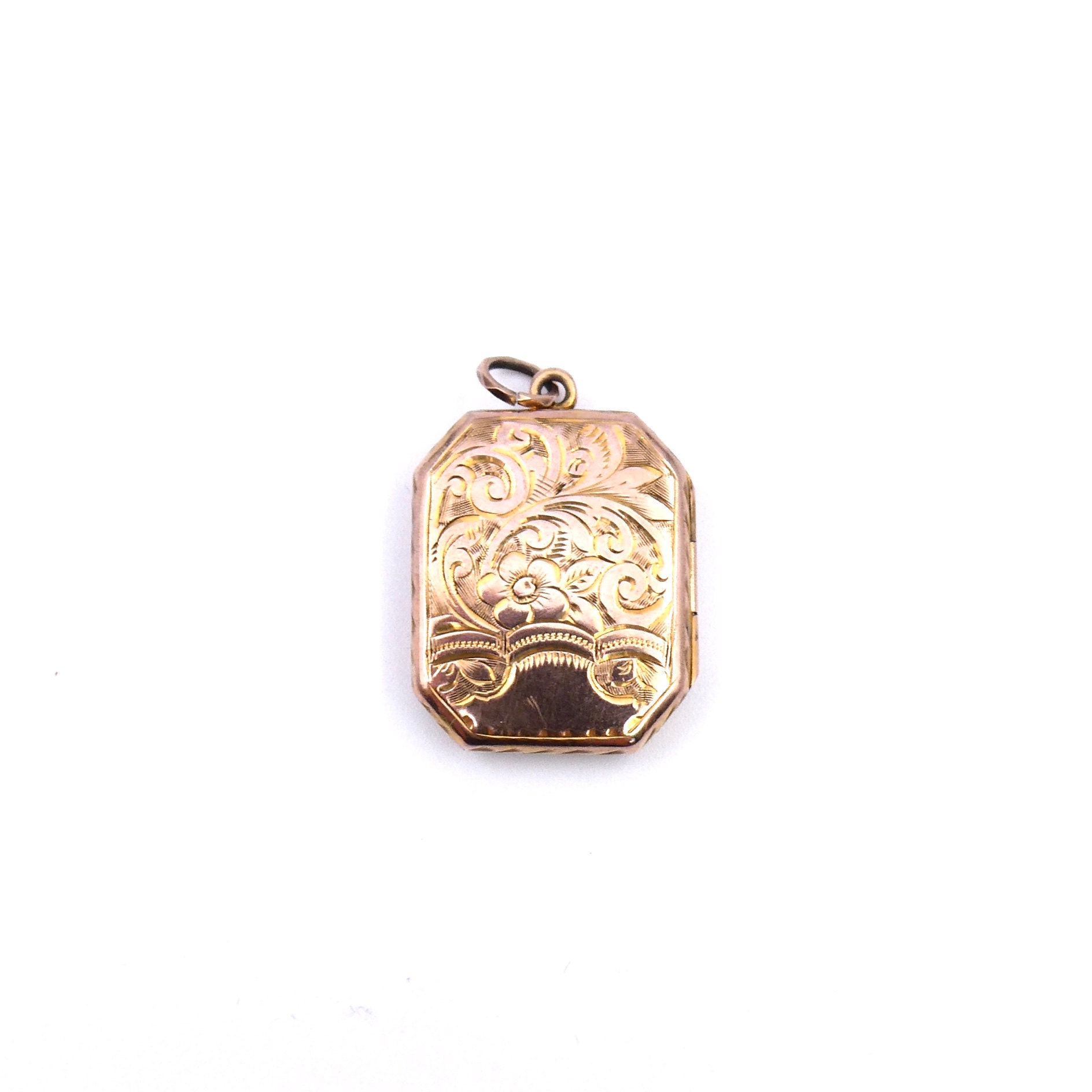 Designs became bolder in the mid-Victorian age and moved away from what was considered to be the sentimentality of the romantic age. Due to the death of Queen Victoria’s husband Albert,  in 1861 mourning Jewellery became extremely popular again. It was made from Jet, enamel or hair. Brooches, pendants and rings enamelled in black bearing words such as “In memorium” or “in loving memory” were set with diamonds or pearls. Hair Jewellery was particularly popular again and fine hair was woven into rings, brooches and bracelets.This fashion for hair jewellery never came back after the death of Queen Victoria thankfully! This is one antique piece of jewellery that I am not a fan of! Lockets reached a new peak in 1880 and were manufactured in both gold and gold “back and front” which meant they could be engraved in 9kt gold  but were internally stronger as the hinges were made from stronger metals.

The Jewellery of the late Victorian age was more romantic, it was softer and features butterflies and roses. There was an emphasis on gemstones such as amethyst, emeralds and opals. This was the beginning of the arts and crafts movement where there was a move towards hand crafted Jewellery. Women became more involved in business in this time so there was an inclination to dispense with jewellery and definitely not wear diamonds during the day!Jewellery was lighter than the preceeding eras. Below is an ornate turquosie cabachon set ring from the victorian period, for more detail about this ring follow this link: 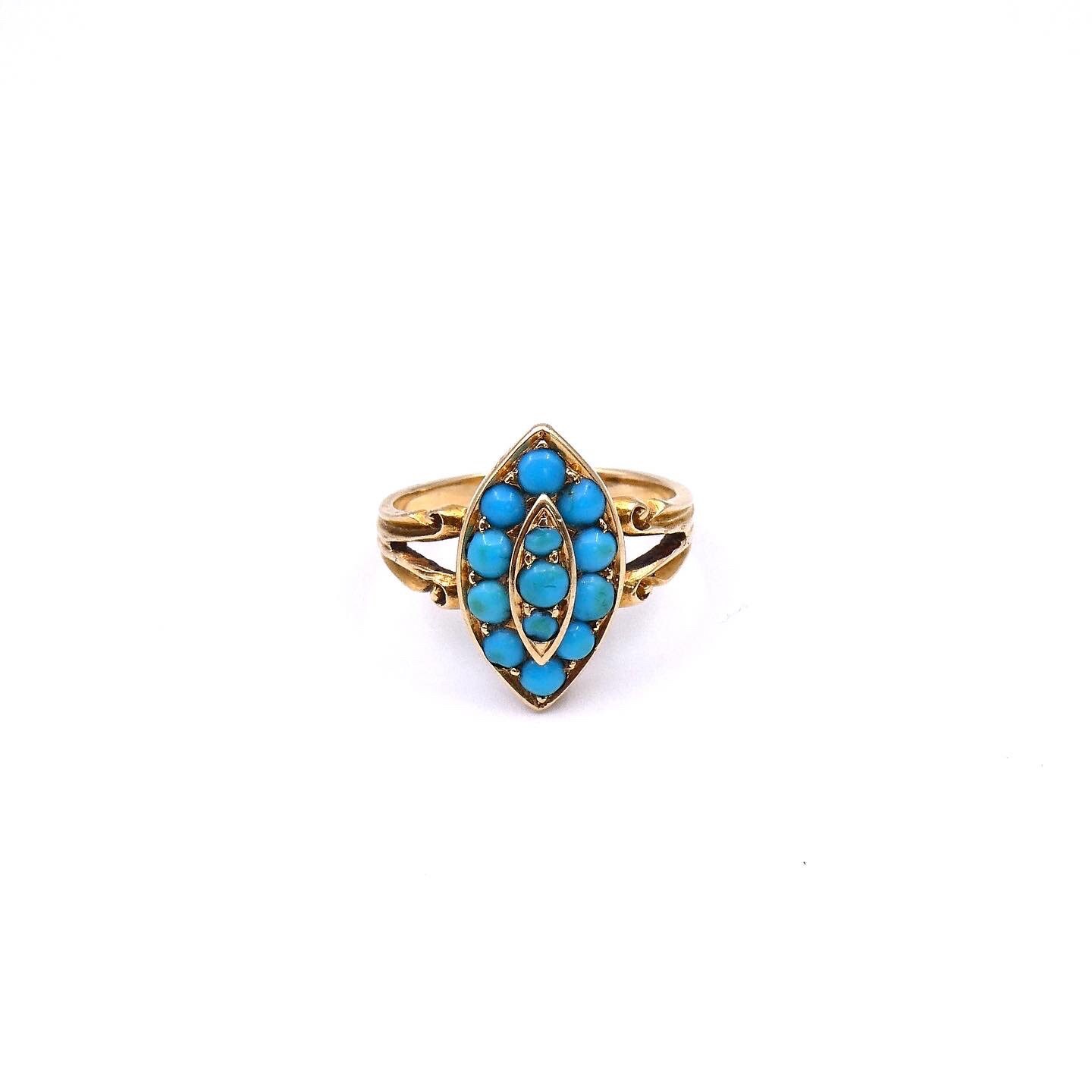 Jewellery in the Edwardian period was distinctively feminine and delicate. There was an emphasis on the colour white, in this period with pearls and diamonds set in the new "white metal"  platinum. Cultured pearls became readily available. These were set in chokers, collars, tiaras, fine bracelets and rings with a delicacy and refinement to the metal work. The designs were often lacy and light in appearance with lots of open work. Diamonds were more uniform and brilliant as cutting techniques improved. Gemstones were calibre set and cut into baguette shapes set with milligrain detail. Popular motifs were bows, moons and stars, flowers, wishbones, and horseshoes.

This is a lovely example of a light and delicate ruby and diamond ring: 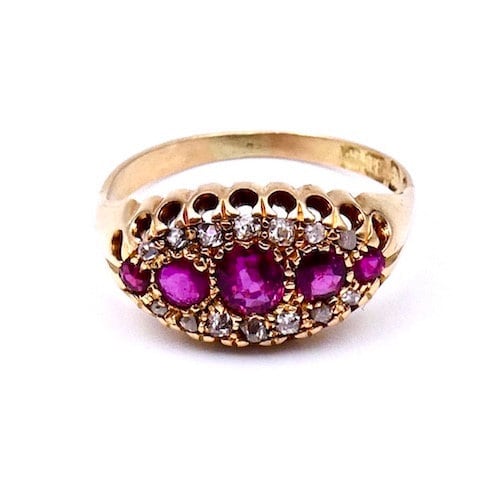 The art nouveau period spanned from 1895 to 1910 so it overlapped both the Victorian and the Edwardian periods. We already noted that the late Victorian age was softer, more romantic and the art nouveau period expanded on these themes. The Jewellery is very identifiable for it’s curves and soft shapes, birds with splayed out wings and tails with enamel work. Flowers, insects and snakes were all seen in Jewellery around this period. There were several type of Enamel work such as plique-de-jour which was made like stained glass; enamelling webbed between thin metal where the light could get through and cloisonné; the enamel was held between metal walls.True to Edwardian jewellery it was light, delicate and feminine. Gemstones that had not been as common in the preceding periods were designed in Jewellery: amber, garnet, opal, moonstone, malachite and horn in subtle and natural colours reflecting the naturalistic themes.

This was a reaction again machine made jewellery and emphasised hand crafted Jewellery. There were less gemstones and a move towards less expensive materials designed in more innovative ways; enamelling as I mentioned developed in the arts and crafts movement. This saw the beginning of Jewellery retailers such as Tiffany and Co and Liberty’s working with individual crafts people. The designer Rene Lalique is synonymous with this historical design period and combined insects, butterflies and birds with the female form to make many designs.

The Art Deco Period 1910-1937  The art deco period has endured in popularity more than any other design period. Designs from this period continue to look modern despite being over 100 years old. These designs were in stark contrast to the flowing, nature-themed designs of the art nouveau and arts and crafts movements. The designs are geometric and symmetrical. They were elongated and angular. The Jewellery was bolder, onyx was combined with jade, coral with pearls; designers combined colours in new and exciting ways. Platinum was in short supply so white gold was used instead. Influences came from Egypt, India and Persia: designs featured flowers, pagodas and temples. There was innovation  in both diamond cutting and in setting, diamonds were cut in rhombic shapes and triangles and these were favoured above the more traditional shapes. These contrasted with the femininity and delicacy of the diamond setting of the Edwardian period. These were strong and bold designs.

It is interesting to examine how  styles of Jewellery evolved from one period to the next and how they related to what was going on historically and politically. When looked at from a distance like this we can see how the pendulum in taste and style moves back and forth. The way the art deco designs responded to the war and the style of the art nouveau period,  with bolder designs and how the mid Victorian era's austere style responded to the more flowery sentimental taste of the preceding years.Below is a lovely example of a sapphire and diamond ring from the art deco periFor more sapphire rings follow this link: 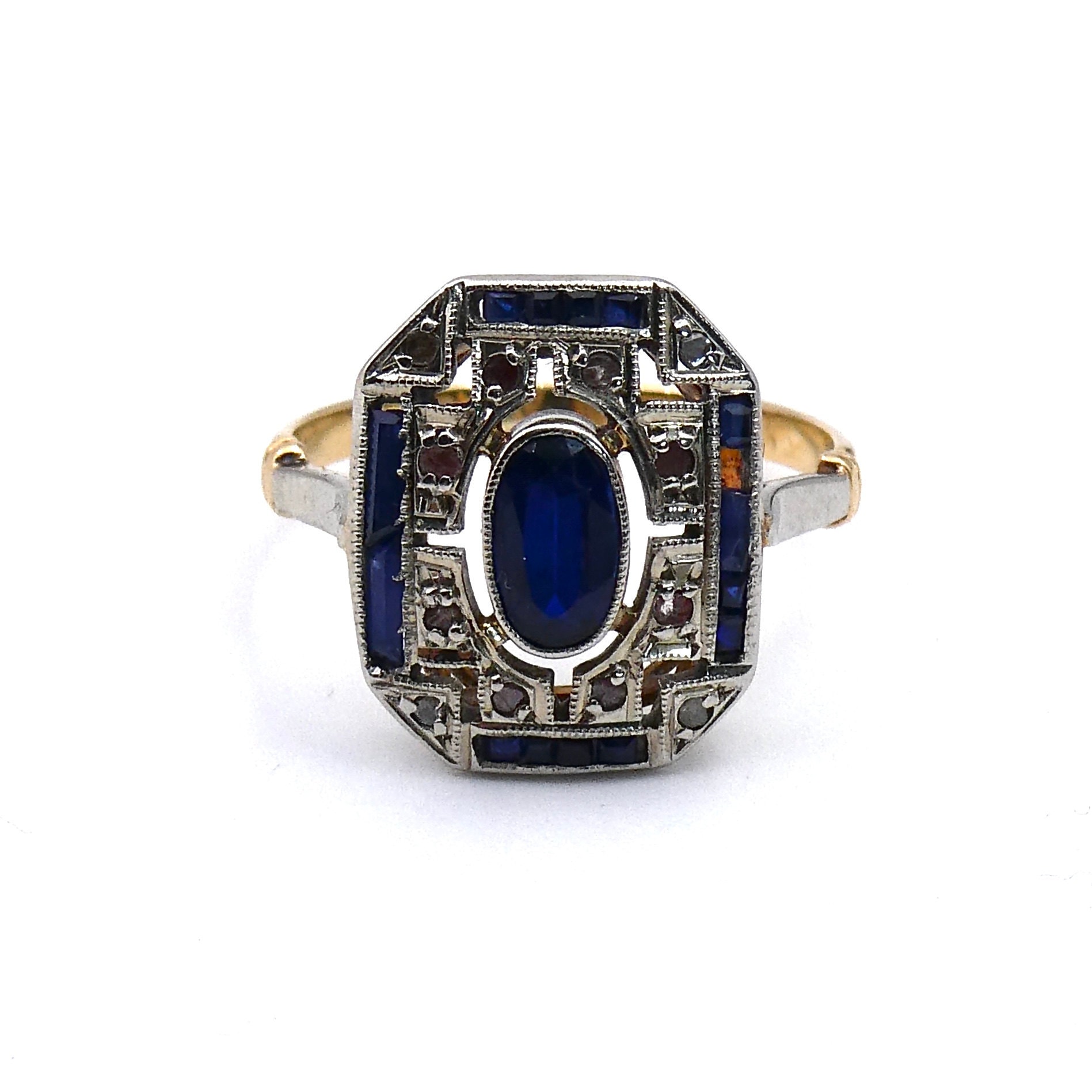