The basics in understanding gold and hallmarks when buying vintage and antique Jewellery
Elegant antique and vintage Jewellery for the individual with their own sense of style, each piece carefully collected. Wear it your way!

Understanding gold and hallmarks when buying vintage and antique Jewellery

Whether you are buying a ring for yourself or a gift for someone else, the different types of gold and what the hallmarks mean can be confusing. It’s a good idea to have a handle on the basics so you feel confident and comfortable in your purchase. This knowledge, combined with a trust in the source you are buying from, and the comfort in knowing that you can return and be refunded on an item should allow you the freedom to choose and buy what you love. Most online shops will furnish you with extra information and photographs if requested and it is important that you do so.

You often see these marked as 750, 585 and 375 which is simply another way of denoting the gold purity.

These are all versions of gold plated metal with different thickness’s and qualities of gold. Gold Filled Jewellery was invented in 1817 but became popular in the 1930's when it became regulated. Gold Filled is jewellery that is fused with a thick layer of gold,  5% is actual gold, this thick layyer is bonded onto a mix of other metals. It will have a 12kt or 14kt stamp but this refers to the gold layer and not to the whole piece. Rolled gold is made in a similar way however there is less gold than in gold filled. Gold plated Jewellery: is made from a base metal with a very thin layer of gold, electro-plated onto it, the layer tends to come off over a few months especially when rubbed or worn a lot. It looks discoloured and can tarnish quite quickly. The gold is only about 1% of the piece. Gold Vermeil is silver jewellery that has been electro-plated with a thicker layer of gold than gold plating but less than gold filled. It can also be called silver gilt!  Like gold filled Jewellery in time the gold will lose it’s lustre and the piece will dull however if looked after it can last many years.

When an alloy (metal) such as copper is mixed in with yellow gold it makes the gold – rose gold in colour, and when the gold is mixed with zinc, platinum, palladium or other white metals it makes the yellow gold appear more white. To complicate matters, white gold has then been plated with rhodium to brighten the whiteness as it is not completely white when a major percentage is actually yellow gold. If you think about it in 18k gold, the gold content is 75% of the total gold piece, the remaining 25% is the white metals. You may buy an antique or vintage white gold ring that has been repolished and re-plated only to notice that it looks a bit less-white or yellow after a year. There isn't anything wrong with the ring but it is a good idea to re-plate your white gold ring every year or so, this is an inexpensive process that can be done in a Jewellers.

White gold became popular in the art deco period in the 1920's when there was a scarcity of platinum. There was a lot of experimentation with mixing the yellow gold with different formulas of white metals to reach white gold.

Hallmarking Systems:  Hallmarking is the oldest form of consumer protection and has been in existence since the middle ages. There are separate but overlapping hallmarking systems in most countries however the French is considered the most complex hallmarking system. I’m going to focus mainly on the British hallmarking system and it’s elements as a lot  of the antique and vintage Jewellery that we encounter is British, at least half having been assayed in the Birmingham assay office. I’ll give a short overview on US, French and Italian systems.  The history and development of hallmarking is really interesting but while it is far from essential to have a knowledge on all the different marks, a grasp of  main hallmarks is helpful as you can identify yourself where a ring was made, assayed and the year of it’s make.

British Hallmarking system: There are four main hallmarks on British Antique and vintage Jewellery as well as some additional marks that can be also be found on pieces.  The leopard’s head was the very first hallmark to be struck on silver and gold in the 13th century in 1238. 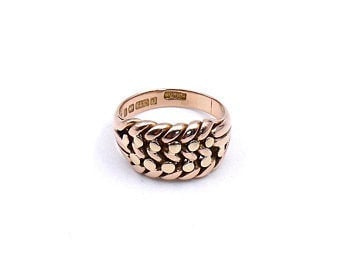 This is a lovely example of a rose gold keepers ring with clear hallmarks for 9ct, Birmingham and the date letter 1905-1906. To see more interesting antique gold and rose gold bands follow this link:

Maker’s Mark:This is usually two letters that denote the maker's mark. This was the first hallmark introduced in 1363 after the leopards head. The maker’s mark was added to prevent anyone reproducing the leopard’s head and marking it on silver or gold, this mark identified the maker of the item of silver or gold. From here onwards there were two marks.

Date Letter: In 1478 another mark was introduced : the date letter. At this time it was decided that Goldsmiths had to bring their work to the ‘goldsmith’s hall’ where wardens ‘marked’ the metal. This was to stop pieces made from inferior metal being stamped with the leopard's head. The name 'hallmarking' originates from 'marking' in the 'hall'.It was at this point also the leopard's head was given a crown. Examples of date letters seen below, it is really important to identify the shape of the surrounding punch, as these vary in form. If you get that wrong you can get the year wrong!

Below are examples of town marks for London, Birmingham, Sheffield and Edinburgh. 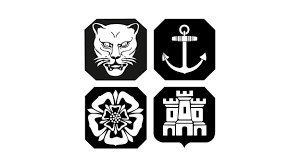 Duty marks were stamped on items between 1784 to 1890, the hallmark being the head of the monarch. This stated that tax had been paid on the item. Additional marks include the Brittania mark for silver, an imported ware mark and convention marks.

The Irish Hallmarking System: The first examples of silver and gold with Dublin hallmarks are from 1637, the hallmarks are a crowned harp, a maker’s mark and a date letter. In 1730-1 the Hibernia hallmark was added to show that duty had been paid and in 1807 the Hibernia duty mark was replaced by the monarch’s head. In the   17th and 18th century Cork and Limerick silver was marked with a castle. Cork sometimes had a ship on it. These were often repeated twice and the maker’s mark was also. The word sterling is also found on Cork and Limerick Silver.

American Hallmarking system  U.S.A doesn’t have assay offices the way European countries do. Historically there is no system of hallmarking. From 1906 a purity fineness mark was marked on Jewellery,  the maker by stamping an item with a fineness mark was taking responsibility for the purity, there was no requirement to mark it by Jeweller. In 1961 it became law for a trademark to be stamped on items. This is in the form of either a trademark or a family name. American Jewellery is usually 14k, it can be differentiated by the letter K for Karat, as it’s represented by a c (carat) elsewhere.

French Hallmarking system:  The French have a historically complex hallmarking system. Gold and silver purity is  indicated by different symbols such as: animals, birds and insects. The law in France dictates that all gold Jewellery is made out of gold, with a purity not less than 18 carat. However items that are exported can be made from lower carat golds such as 9 and 14. Small items of Jewellery can have a maker’s mark and purity mark. From 1838, the Eagle’s head indicated gold purity of 18k and a boar’s head or a crab’s head indicated silver fineness of 800.  Maker’s mark : From 1797 the maker’s mark was indicated by a lozenge shape with the initials of the makers mark within it. Prior to this it was in a crowned shield. Date letters were added in France in 1427.

Italian hallmarks  From 1872-1933 Italian silver was marked with a crowned head, and a purity symbol in decimal form for example .800 would have been common for silver. Before this Italy wasn’t unified, it was a myriad of kingdoms and principalities. The maker’s mark was stamped in a lozenge shape with the sides cut off and within this was the makers initials on one side and the province initials on the other. From 1934 to 1944 ‘fasces’ the symbol for the fascist party,  a bundle of sticks, divided the maker’s mark and the province initials. From 1968 the hallmark developed to what it is today a rectangular stamp with pointed sides with the makers mark and province stamped inside.

What if there is no hallmark on your Jewellery?

There were lots of reasons that Jewellery might not be hallmarked. Many pieces of Jewellery have been repaired or rings have been re-sized thereby erasing the hallmarking. Lots of Jewellery was never hallmarked in the first place despite there being legal requirements. Some pieces were considered too small to be marked. A lot of Victorian and Edwardian lockets only have a 9 carat stamp and some have nothing at all. Below is a beautiful example of an art nouveau rose gold locket from 1910 with only a stamp "9ct back and front"- 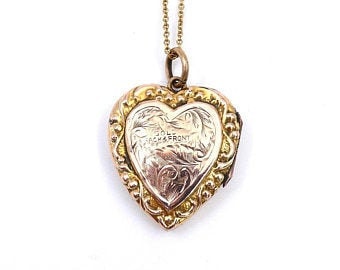 It could be an American piece that didn’t have any legal requirements for hallmarking jewellery up until 1906. A piece of Jewellery can be appraised and dated on other factors such as the cut of the diamonds or gemstones, the type of setting, or a combination of factors such as the style of the piece, colour of metal and cut of stones.

If you would like help identifying a hallmark get in touch with us!

or send an email to elva@collected.ie

Previous Post Trying the new sapphire and diamond cluster ring in white gold!
Next Post An overview of the stylistic features of Jewellery from the 18th, 19th and 20th centuries
0 items in your cart